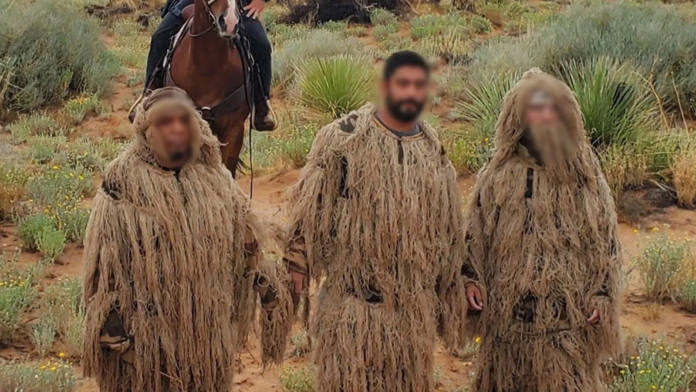 Three illegal migrants were detained by the Border Patrol while trying to enter the US illegally camouflaged as ‘Chewbacca’ from Star Wars.

US Border Patrol agents in New Mexico apprehended three undocumented migrants who, wearing camouflage that made them look like the character Chewbacca from “Star Wars,” were trying to go unnoticed.

Gloria Chavez, Border Patrol chief in the El Paso, Texas, sector, posted three photos of the men covered in outfits known as ” ghillie suits,” which use long fibers or leaves to resemble the natural environment.

“Individuals who enter the United States illegally will often use extraordinary tactics to evade detection and arrest,” Chavez said in the message accompanying the photos.

Likewise, he congratulated the agents of the El Paso and Santa Teresa Sectors (New Mexico) “for intercepting the three migrants wearing ghillie suits to blend in with the desert terrain of southern New Mexico.”

The photographs show the three individuals, unidentified, wrapped in suits that, with dangling ribbons, resemble the lean vegetation of the desert region.

Between October of last year, when the fiscal year 2022 began, and July of this year, the Border Patrol has made more than 2.2 million apprehensions of undocumented migrants in the south and southwest of the country.

Border Patrol agents in the El Paso sector, commanded by Chavez, have made 228,952 arrests of undocumented immigrants until July since the beginning of the fiscal period.

Although agents have encountered migrants from other countries, the majority are Mexican, Honduran, Salvadoran, and Guatemalan.