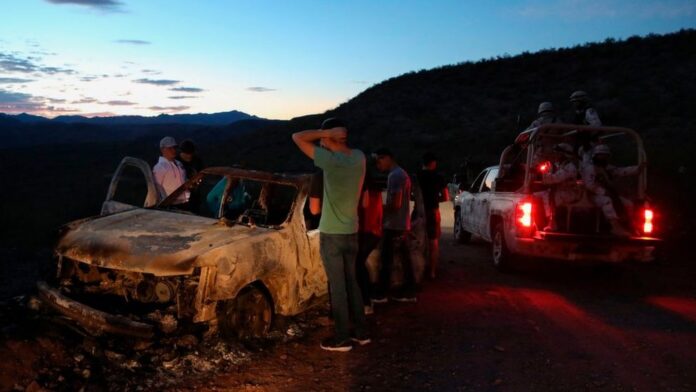 Sally Denton, author of the book The Colony: Faith and Blood In A Promised Land, that behind the massacre in Bavispe, Sonora, there was “a great message, not for women and children, but for their husbands and fathers.” In her book, she also adds that it is much more than a perverse, corrupt, and violent Mormon family and its relationship with the drug cartels. “It is, in fact, a fascinating deep dive into Mormon bigotry, violence, deceit, mental illness, and misogyny, dating back to the religion’s mid-19th-century founding by Joseph Smith.”

Mexico City, July 4 (However).- A new book and its author, American Sally Denton, claim that the LeBarón family had dealings with Mexican drug trafficker Joaquín “El Chapo” Guzmán Loera before the massacre that occurred on July 4. November 2019, when gunmen attacked and killed women and minors on a rural road in the Sierra Madre Occidental, near the community of La Mora, municipality of Bavispe, Sonora.

“This all fell apart when ‘El Chapo’ was extradited to the United States and sentenced to life in prison, after which rival groups began fighting over the Sinaloa drug empire, putting the lives of Mormons in danger. ”, the author said in an interview for the Daily Beast.

At the time, President Donald Trump condemned the massacre and put pressure on Mexico. “If you need or request help cleaning up these monsters, the United States is ready, willing and able to step in and get the job done quickly and effectively,” he said. The massacre meant enormous pressure for the government of President Andrés Manuel López Obrador.

In a text published by the journalist Lewis Beale in the Daily Beast, details of the new and revealing book are given and the LeBarons are seen as a family group that has been involved in different violent events for years. In fact, Beale’s text begins like this:

“He’s been called the ‘Mormon Manson’ [referring to Charles Milles Manson, a cult-founding serial killer], but polygamist Ervil LeBaron and his Mexican family managed to make Charlie and his gang seem almost tame. A six-foot white supremacist and religious fundamentalist who loved seducing underage girls, LeBaron trained women to kill for him and ordered attacks on rival polygamists and church ‘apostates’ from him.”

“And they killed – he adds –: members of the LeBarón family were responsible for up to 50 murders, as well as bank robberies, car thefts, drug trafficking and the sale of weapons to drug traffickers.”

Lewis Beale is a former reporter for the Los Angeles Daily News, the Detroit Free Press, and the New York Daily News. This text is now published on the Daily Beast

Ervil was eventually arrested for his crimes and extradited to the United States where he died in prison in 1981. “But his wives, children and spiritual followers continued their murder spree well into the ’90s. As one member of the LeBaron family put it: ‘Everyone is an unbeliever if they don’t believe what you believe.'”

Lewis Beale’s text states that “the LeBarón seemed to be just a clan of rich farmers with strange sexual practices who had made a pact of ‘I don’t bother you if you don’t bother me’ with [Joaquín Guzmán Loera] ‘El Chapo’ and with the notorious Sinaloa cartel, which had drug smuggling routes near the Mormon colony. But, says Sally Denton, author of The Colony: Faith and Blood In A Promised Land, ‘I think it’s naive for the public to think they were just friendly neighbors waving at hitmen’s checkpoints. I don’t think you don’t live with some of the most violent people in the world without agreements. I think they were helping with weapons.’”

“This all fell apart when ‘El Chapo’ was extradited to the United States and sentenced to life in prison, after which rival groups began fighting over the Sinaloa drug empire, putting the lives of Mormons in danger. . And on November 12, 2019, the worst that could happen happened: On a 12-mile [25-kilometer] stretch of barren highway, a favorite drug cartel route that linked two Mormon enclaves, as many as 100 gunmen descended on a three-car convoy containing Mormon mothers and their children and killed nine people, some of whom were burned alive.”

Lewis Beale says some said the victims were deliberately targeted to start a war between the Sinaloa and Juarez cartels. “Others said it was a case of mistaken identity. And others said it was a consequence of a fight over water rights between Mormons and their Mexican neighbors.”

“I think someone owed someone something. I think there was a great message, not for women and children, but for their husbands and fathers. It was not a case of mistaken identity; they targeted them. It was about money. Someone reneged on some kind of deal.”

But the book The Colony, adds the author, is much more than a perverse, corrupt, and violent Mormon family and its relationship with drug cartels. “It is, in fact, a fascinating deep dive into Mormon bigotry, violence, deceit, mental illness, and misogyny, dating back to the religion’s mid-19th-century founding by Joseph Smith.”

The book tells of several massacres that have occurred in the United States and are linked to the same religious group. Denton says in an interview with the Daily Beast: “There are references to a variety of crazy things in the LeBaron family and the leaders of the Mormon Church, historically. I think it is the fact that the whole Church is based on this communion with God that any man can do, and configures it with illusory aspects. You have to look at the visions of Smith and Young, even the LeBarons, and wonder what the momentum is here. I think that with the LeBarons, a lot can be explained by incest.”

“And then there is polygamy. The practice was part of the Church from its inception, but when Mormon leadership realized that Utah would never become a state because of its existence, polygamy was outlawed in 1890. That forced die-hard fundamentalists south. , to Mexico, where then President Porfirio Díaz encouraged them to settle in the northern states of Sonora and Chihuahua, which soon became a hotbed of religious fanaticism. Mexico now has the largest Mormon population outside of the United States.”

During the Mexican Revolution, Pancho Villa forced them back to the United States, and most never returned. “But the LeBarons did and established Colonia LeBaron in 1944. It soon became a center of sexual deviance, something that has also been part of Mormon history since its inception,” details Lewis Beale.

“When Joseph Smith first introduced [polygamy] it was not without some sexual deviation,” Denton says in the interview with the Daily Beast. “I interviewed wives and daughters who grew up polygamy, and one of them said they converted below the belt. It promotes sexual deviation, a lot of suppression, and repression, even in people who don’t have that propensity. The true believers believe that they are creating the kingdom of God on Earth, and the goal is to spread the seed of man, and for women, it is to have as many children as possible, and in the LeBaron neighborhood, they started having babies as soon as possible. since I was 13 years old”.