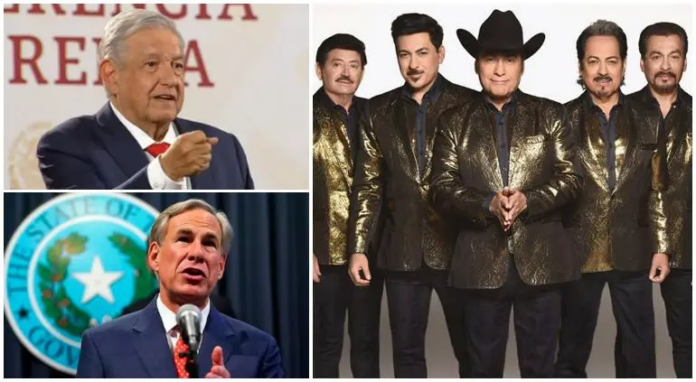 AMLO said he will not allow Mexican migrants in the US to be offended.

President Andrés Manuel López Obrador dedicated a song by Los Tigres del Norte to the migrants from Puebla who live and work in the United States.

During the morning press conference this Thursday, the Mexican president asked to reproduce the corrido ‘ We are more Americans ‘ in response to the statements of the governor of Texas, Greg Abbott, who is analyzing the possibility of declaring an ” invasion ” in his territory before the massive arrival of migrants.

“The governor of Texas saying that he is going to declare that they are being invaded by migrants, by Mexicans. It is an exaggeration, it is very dishonest, and it is disproportionate. We are not going to allow Mexicans who have gone to the United States to live and work honestly to be offended,” said AMLO from Puebla.

“ They have every right to seek life. Also, how did that great nation that is the United States come about? Well, with the arrival of migrants from all over the world. We are all travelers, walkers, migrants,” he added.

The President reiterated that he thinks that the statements of the governor of Texas “ are wrong ” and quoted a phrase from the famous song on the album Uniting borders: “ I want to remind the gringo: I did not cross the border, the border I crossed ”.

“This conference is seen by many countrymen who love them very much. Migrants are an example of work, brotherhood and humanism, they are among the migrants who support their families the most”, she declared.

” This song is also dedicated to the migrants from Puebla,” said López Obrador before playing the corrido.

With “permission” from Los Tigres del Norte and dedicated to the migrants from Puebla, President López Obrador reproduced the corrido that is a duet with Zack de la Rocha.

The musical theme talks about Mexicans who crossed the border to the United States, where they face xenophobia; but it also highlights the trades of migrants in US territory.

“I want to remind the gringo: I did not cross the border, the border crossed me,” says part of the song.

Also the corrido of the Baja California group speaks of the territory that Mexico lost :

“They painted the line so that I could jump over
it. And they call me an invader.
It’s a clear mistake, they took eight states from us
. Who is the invader here?
I’m a foreigner in my land,
and I’m not here to give them war, I’m a working man.”

“They bought the waters of the Rio Grande from us without money.
And they took Texas, New Mexico, Arizona and Colorado from us.
California and Nevada also blew up, with Utah they were not filled,
The state of Wyoming, they also took it from us.
I am the blood of the Indian, I’m Latino, I’m mestizo
We are of all colors and of all trades
And although it hurts the neighbor, we are more American than all the gringos “.