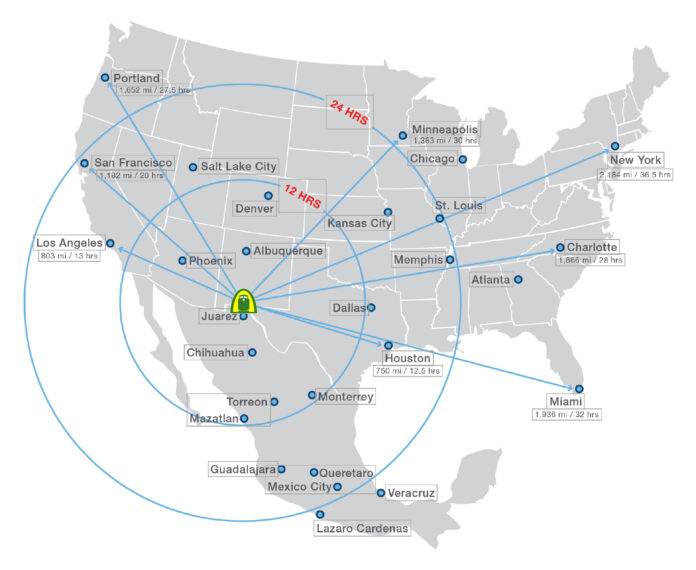 SANTA FÉ, N.M. (AP) — New Mexico has voiced its support for a proposed international rail line that would pass through the Santa Teresa border crossing, taking advantage of Mexico’s discontent with disruptions at ports of entry. with Texas.

Mexico had considered a route through Texas, but in recent days, authorities have said they can no longer trust that state. In April, Governor Greg Abbott required all commercial trucks in Mexico to undergo additional inspections, congesting traffic and causing billions of dollars in losses.

The Secretary of Economic Development of New Mexico, Alicia Keyes, reported that the state has already requested permission from the President of the United States for a railway bypass route that passes through Santa Teresa. Separately, she said that she is nearing the completion of a study on infrastructure expansion at the New Mexico crossing.

“They have issues with contamination, wait times, and security,” Keyes said of Texas border entry points. “We have an opportunity to really envision what a dignified port of entry would look like.”

The Mexican Secretary of the Economy, Tatiana Clouthier, was more forceful last week about the fate of a train line that would link the port of Mazatlán, on the Pacific coast, in the Mexican state of Sinaloa, with the United States and Canada.

“I think we’re not going to use Texas anymore because we can’t leave our eggs in one basket and be held hostage by someone who wants to use trade as a political stock,” Clouthier told a business conference. “We are going to look for another connectivity.”

Mexican diplomats followed up on the issue Tuesday in Washington with US Homeland Security Secretary Alejandro Mayorkas, promoting a train line linking Mexican seaports on the Pacific with the San Jerónimo-Santa Teresa crossing in New Mexico.

In Texas, some truckers have waited more than 30 hours to cross due to inspections. Others blocked one of the world’s busiest commercial bridges in protest.

Abbott, who is up for re-election in November and has made the border his top issue, lifted inspections altogether after reaching agreements with neighboring Mexican states related to border security.

A railway project worth billions that was planned to travel through Laredo to boost trade and economic development in both the city and Texas as a whole has been moved to another state. The decision was made as Mexico retaliates against Texas Gov. Greg Abbott’s enhanced inspections which cost Texas $4.2 billion over a little more than a week despite turning up no migrants or narcotics.

The planned railway was known as the T-MEC Corridor project. It was to connect the Mexican port of Mazatlán to the Canadian city of Winnipeg, and it was to have new logistics centers along its route. Instead, the project will now go through New Mexico, routed along the edge of West Texas through Santa Teresa, New Mexico.

Abbott’s enhanced safety inspections began April 6 and lasted 10 days for trucks crossing the border. He stated the move was in response to the Biden administration allowing the CDC to end the Title 42 public health order.

It’s important to note that these trucks were already being inspected by federal authorities such as Border Patrol, Customs & Border Protection and the U.S. Transportation Motor Carriers, along with inspections on the Mexican side as well. Thus these were additional inspections done by the Texas Department of  Public Safety. Rep. Henry Cuellar also confirmed that these inspections were mechanical in nature only, so while Abbott stated they were for stopping migrants and narcotics, DPS could not physically check these trucks’ cargo even if it wanted to.

Due to the measures, traffic into the country was slowed considerably with some truckers even reporting they had to wait days to cross. Others stated that in addition to the long waits, some refrigerated trucks ran out of gas. Overall, produce companies lost an estimated $240 million due to spoiled products.

Abbott stated that the enhanced inspections would stop for the impacted areas once Mexican leaders from each area agreed to increase border security, and he held press conferences at each location once they did. He also threatened afterward that he could bring the measure back at any time if he deemed they were not living up to their agreement.

“We’re now not going to use Texas,” Clouthier said. “We can’t leave all the eggs in one basket and be hostages to someone who wants to use trade as a political tool. We are going to look for that connectivity because we can’t live through what we just lived through a couple of weeks ago.”

Meanwhile, Mexico’s Foreign Minister Marcelo Ebrard accused Abbott of extortion for the decision in an interview with Milenio.

“It’s an extortion scheme. Rather it is extortion — I close the border and you have to sign what I say,” Ebrard said. “That’s not a deal. A deal is when you and I agree on something.”

Texas’ largest trading partner is Mexico. Bloomberg estimates more than $400 billion of goods cross annually, and exports from the state are equivalent to 17% of its economy — with about one-third of Texas exports going to Mexico.

“It’s not just necessarily (Mexico) being hostile, but them taking a concrete step,” said Nitya Pandalai-Nayar, an economics professor at University of Texas at Austin, to Bloomberg. “Firms all over the country trade with Mexico, and many of them use Texas as the base for shipping to Mexico.”

Not surprisingly, New Mexico was excited by the recent news as it is now set to receive an economic boost that was meant for Texas.

Meanwhile, Jerry Pacheco — president of the Santa Teresa-based Border Industrial Association where the railway will now travel — told the Dallas Morning News that he’s already seen a significant change in the Mexico business community in the wake of Abbott’s order including higher traffic numbers from northbound cargo shipments. But while the area is now going to benefit from the order, he still was critical of the decision occurring in the first place.

“We also absolutely play politics with the border, but we play to bring more trade from Mexico through our New Mexico ports of entry, not to impede trade,” Pacheco said.