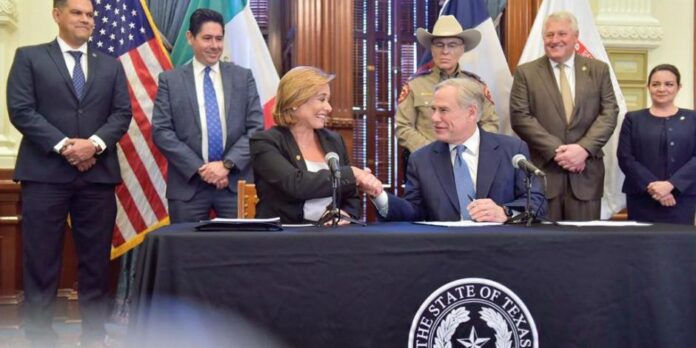 In a joint news conference Thursday evening, Campos and Abbott announced the agreement after a meeting in Austin.

Abbott said Campos presented “the best border security plan that I have seen from any governor of Mexico.”

Campos said Chihuahua would collaborate with the Texas Department of Public Safety, and Abbott said state troopers could now return to random inspections at the Texas border.

Abbott said, “as a result, the effect will be, that the bridge between Chihuahua and Texas will return to normal immediately.”

“Chihuahua is doing more than just talking about this,” Abbott said. “They have an organized game plan to step up and address illegal immigration from Chihuahua into Texas.”

Campos shared with Abbott an outline of her border security measures, which includes moving the headquarters of the state public security agency to Juárez.

The agreement is expected to return the flow of trade to normal at two El Paso bridges that process commerce, the Ysleta-Zaragoza bridge and the Bridge of the Americas.

The governors’ discussion follows an accord reached Wednesday between Abbott and Nuevo León Governor Samuel Alejandro García Sepúlveda, in which the Mexican governor agreed to increase safety inspections of trucks on the Mexican side.