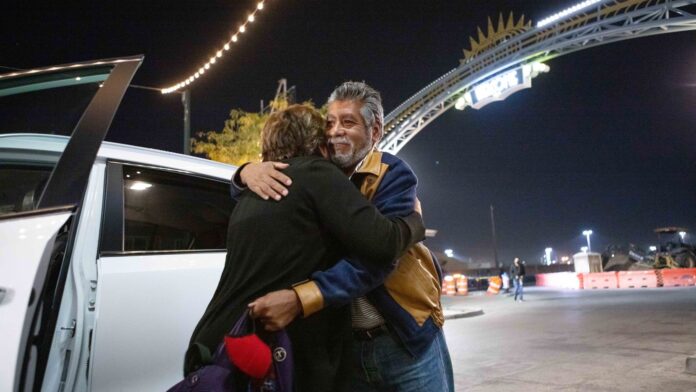 El Paso – After almost 20 months of restrictions, the United States reopened its land border with Mexico on Monday, November 8, to allow the entry of non-essential travelers who are fully vaccinated against covid-19. The day was quite orderly and far from the chaos that many feared.

At 10:01 pm local time —12:01 am EST — restrictions were lifted and hundreds of people had lined up at the Santa Fe International Bridge, which connects the centers of El Paso’s sister cities. and Ciudad Juárez, began to advance.

Before the reopening, there were lines of up to 2.5 miles (4 kilometers) to cross, according to sites that monitor traffic on international bridges. As the day progressed, the waiting times decreased.

Martha Ochoa Moreno, 68, was one of the first people to cross after showing proof of the AstraZeneca vaccine, to join her 28-year-old granddaughter Laura Tinajero, whom she had not seen since the border closure.

“There is nothing like being able to hug (loved ones); video calls helped us a lot all those months, but it’s not the same. Today I will finally be able to hug my granddaughter, ”said Ochoa Moreno, who lives in Ciudad Juárez.

Prior to the restrictions, Ochoa Moreno crossed several times a week to visit his family and go shopping.

“I brought you a few things; his Karo honey that he likes so much and cannot find here. I did not want to bring many things because we were afraid that they would throw them at me or say something. But no, the agents (were) very nice, I just showed them my certificate, the visa and that’s it, ”added Ochoa Moreno.

He also brought her a packet of the traditional ‘Chocolate Abuelita’ and a mug from the painter Frida Kahlo. On Monday they planned to shop at Target and Walmart.

Some people arrived earlier in anticipation of the long lines, including 15-year-old Juan Manuel Herrera, who crosses every day and works in gardening. On Monday he arrived an hour and a half earlier than usual to line up walking on the Santa Fe Bridge.

“I enter at 8, I hope I can arrive,” said Herrera, a US national. At 6:15 am, the pedestrian line was more crowded (mid-bridge) than the car line, but it was moving smoothly.

Daniel Benítez Zamudio, 16, was there from 5 am to sell sweets as he does every day. He also noted that the flow of people was advancing rapidly.

He said he had never seen so many people cross so early.

“I always wear at 5 (am) but there are not so many people,” said Benitez Zamudio. “I hope to sell more sweets than before because until now no one has wanted change, everyone brings it exactly.”

Benítez Zamudio assumed that because of the excitement of being able to cross after almost 20 months, people took the time to count on the exact change before crossing.

“The chaos was all night, right now there is no line,” said Belén Hernández, who sells burritos, sweet bread, champurrado, oatmeal and coffee in front of the Paso del Norte international bridge. He arrived at the bridge at 1 am expecting to sell more than usual.

“I have sold less than a normal day,” he said.

The crossing of visitors and tourists on “non-essential” trips in land customs was restricted from March 21, 2020, as a measure to contain the covid-19 pandemic.

The White House announced in early October the lifting of restrictions for visitors who enter by land or air and who present proof that they are fully vaccinated.

The removal of the restrictions that were imposed during the Donald Trump administration comes as a relief for tens of thousands of families who have been separated since the beginning of the pandemic.

One of those cases is that of the brothers Ramón Delgado, 60 years old, originally from the City of Chihuahua, and their sister Bertha Galván, 71 years old, and a resident of El Paso.

“I was very pleased (to see my sister) because (we had) not seen each other for a long time since the pandemic began,” said Delgado, who is an engineer by profession.

“My sister got covid, not me, but it did scare me, so I really wanted to see her and hug her.”

Delgado said that he lined up at 5 pm to be among the first to cross as a non-essential traveler. But at 10:01 pm El Paso time, US officials told them he was ready to cross by showing his visitor visa and vaccination certificate.

“They only asked me if I was vaccinated and I said yes; I showed them my voucher and now, (they were) very kind all the immigration people ”, added Delgado.

Once he crossed into El Paso, he waited for about 20 minutes until his sister arrived in a white van to pick him up. When they saw each other, she hugged him and gave him a kiss on the cheek and they spoke in his ear.

“There is a lot of emotion to finally be able to hug him; the truth was I was afraid (because) I thought they were not going to let people through. When she called me and said ‘I’m here’, I didn’t believe her, “said Galván while wiping tears.

The Customs and Border Protection (CBP) authorities asked visitors to carry their proof of vaccination in addition to their visa or any other document with which they can enter the country legally.

By Monday afternoon, the hustle and bustle on South El Paso Street, which connects to the Santa Fé International Bridge, slowly revived its brilliance, as it was before the pandemic.

Berenice Treviso, 22, crossed the bridge from Juárez carrying a suitcase. She was on her way to Colorado Springs to see her older sister, whom she hadn’t hugged in over a year. The visit was also the first time she crossed alone, she said.

Usually, he crossed with his family. Treviso has a visitor visa that allows him to visit the border strip, but on Monday he applied for a 1-94 permit, which allows him to travel beyond 100 miles. “It was all so easy and efficient,” he said. “Even the customs officer was nice.”

Gerardo Rojas, a 61-year-old from Juarez, was looking for a T-shirt “from Tom Brady, but (the uniform) from Buccaneers (from Tampa Bay),” he said. “Everything is much cheaper here and the variety is second to none.”

When he crossed the bridge for the first time in almost 20 months, Rojas said: “I felt goosebumps. I felt so, so happy. I even missed the lines of the bridge already. That is part of a routine that I have missed so much. Both cities are part of our daily existence. I feel complete now ”.

But lines to cross into El Paso were virtually non-existent on Monday, said 23-year-old Janet Moreno, who crossed with her niece, Chelsea, 3. Her face radiated “a happy smile,” she said. “I was not planning to cross. I came to see how many people were waiting and for my taste, the line was short, so here I am ”.

By noon, she had already bought her first Christmas gifts, Barbie dolls for her nieces.

More than 60 pounds of methamphetamine product of Mexico were seized at Alamogordo, NM