One of the decisions that have marked the months of the pandemic in Mexico is the refusal of President Andrés Manuel López Obrador to grant the country’s businessmen fiscal incentives that would allow them to overcome the inevitable crisis that the epidemic brought with it. Even internationally, this financial decision has not stopped making noise and generating warnings. From institutions, experts, and the international press.

The most recent occasion is in an article in the British economic newspaper Financial Times. In an article entitled “The strong control of the populist AMLO over the finances of Mexico slows the stimulus of Covid”, the publication points out that, although the austerity policies established by the Mexican president, in theory, will lead to a healthy recovery, the recovery It will even take longer than that of those countries that have opted to acquire a large debt to face the coronavirus.

“Mexico’s refusal to mitigate the economic impact of the Covid-19 pandemic by increasing public spending will leave you with the lowest budget deficit among the major Latin American economies this year, but that also means that his recovery is lagging behind ”, warns from the beginning the text that names López Obrador“ populist ”and they emphasize that, despite the record number of deaths that Mexico has worldwide, he prefers to continue paying “The social benefits that are a hallmark of your government, increasing its popularity .”

They also recall that he has not given up on stopping the construction of his flagship projects – such as the Mayan Train or the new airport – and that he abhors “bailouts financed by the state, which, according to him, have turned private debts into a public responsibility in last”.

“ Their stance leaves Mexico with a healthier budget balance than other economies in the region, said Joan Domene of Oxford Economics: ‘By not spending much on pandemic relief measures, Mexico will be very close to having primary surpluses in 2020 and 2021 ”, the article relates.

So they indicate that although this will keep Mexican debt levels low, López Obrador’s fiscal restriction is untimely according to what some economists have explained.

“The IMF and the World Bank have been urging nations to borrow to cope with the economic crisis caused by the pandemic, despite the long-term problem of higher public debt than this will leave them. “We believe that they could have done more: Mexico has access to credit and the cost of financing Mexico in dollars is at historically low levels,” Alejandro Werner, director of the IMF Western Hemisphere, said recently, “they stand out in this regard. 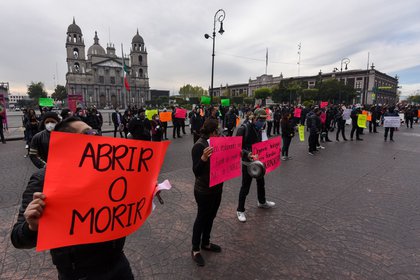 And again they put the case of Brazil to explain the lag that Mexico will experience: Brazil will recover its GDP level prior to the pandemic by 2023 while Mexico could delay until 2026, the IMF warns.

Although they also remember that the contraction of finances in Mexico is not entirely a consequence of the pandemic, but for other causes such as the hostility of the Fourth Transformation policies towards investors materialized in the cancellation of what would become the New Mexico City Airport, as well as that of a brewing plant in the north of the country.

“ The economy of Mexico will receive an indirect boost if Joe Biden launches more stimulus measures in the United States, its largest trading partner. In addition, its restriction on the debt has reduced the risk that a credit rating agency will downgrade it to garbage, a threat that once seemed inevitable this year, analysts say, “the text details. However, citing Andrés Abadía from Pantheon Macroeconomics, they warn that the situation in Mexico it could get worse faster than in other places.

“Even if Mexico reaches the government’s target of 4.6 percent GDP growth in 2021, well above the IMF’s expectation of 3.5 percent, state revenues are under increasing pressure and, with the mid-term elections scheduled for June, López Obrador will not be willing to increase taxes, “concludes the financial daily.