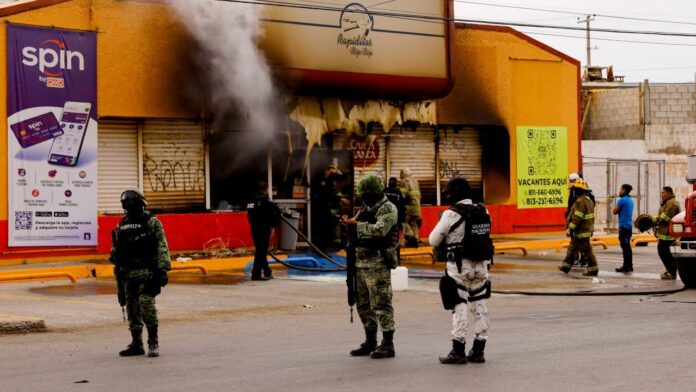 Hundreds of Mexican soldiers were sent to the border city of Juarez Friday after a prison face-off between members of two rival cartels caused a riot and shootouts that killed 11 people, mostly civilians, authorities said.

A riot then broke out, leaving two shot to death and four injured with bullet wounds, Mejia said, speaking alongside Mexican President Andres Manuel Lopez Obrador at a regular news conference. 16 others were wounded in the fighting, he said.

Officials did not say what caused the clash.

Following the riot, the Mexicles rampaged in the city, authorities said, killing nine civilians. Among them were four employees of a radio station, including one announcer, Mejia said.

Across town, convenience stores were shot at and set on fire. FEMSA, the parent company of the Oxxo chain, said in a statement that one of its employees and a woman who was applying for a job were killed in the violence.

Around 1 a.m. Friday morning, six alleged members of Mexicles were arrested by local police, with help from the Army and National Guard, Mejia said.

By Friday afternoon, some 300 Army soldiers were scheduled to arrive in town, with another 300 to follow.

“(Juarez) Mayor Cruz Perez has let us know that (the city) is now in a state of calm; public order has been reestablished,” Mejia said.

Thursday’s attacks follow clashes between cartels and the military in central Mexico, which led to taxis, buses, and some 20 Oxxo stores being set ablaze, Lopez Obrador said.

“We should not and cannot get used to this type of event,” said retail group ANTAD. “Mexico does not deserve it.”