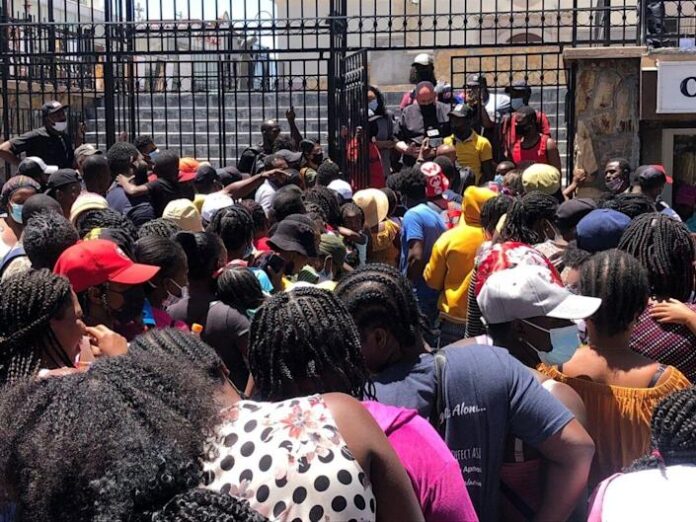 CIUDAD JUAREZ, CHIHUAHUA.- The decision of a federal judge that forced the United States to continue the immediate expulsion of migrants under Title 42 placed Ciudad Juárez on the cusp of a new humanitarian crisis, due to the daily increase in the migrant population on this border.

The flow of more than 100 expelled per day from U.S. territory under Title 42 and the growing arrival of migrants waiting to cross the border has the shelters close to being saturated. Hundreds of other migrants are in spaces that they rent on their own in hotels or homes, while others live in houses in abandoned conditions.

“I think that now it is going to be necessary for the government and government agencies to give an answer (soon) because for the moment we are somewhat overwhelmed,” said Rosa Mani, the coordinator of the Somos Uno Por Juárez shelter network, made up of 15 of the 23 humanitarian shelter spaces that operate in the city, mainly by civil and religious organizations.

Mexican authorities addressed the migration issue Friday morning during the meeting of the Coordination Table for the Construction of Peace, which is made up of representatives of the federal, state, and local governments. They discussed strategies for a new spike in migration due to the possible suspension of Title 42, which the U.S. government had planned for Monday. That plan was blocked hours later by a U.S. federal judge from Louisiana.

Even with the continuation of Title 42, officials are concerned the massive concentration of migrants in this community will continue to increase due to the expulsion of people from the north and those who continue to arrive from the south.

Migrants stranded in the city are beginning to despair and seek to cross the border. This motivated nearly 300 people from Haiti to gather Friday in front of the Cathedral of Our Lady of Guadalupe in the downtown area, to go to the Office of Human Mobility of the Diocese of Ciudad Juárez in search of information on Title 42.

“They are afraid that many people are staying here without being heard. The cathedral has been their home in many ways and they come to ask for help to see if we can register them (to cross), but that’s not in our capacity,” said Cristina Coronado, the coordinator of the diocese office that provides humanitarian assistance as distribution of pantries, clothing, and orientation for people who have just arrived.

Title 42 is a public health law that the Trump administration invoked in March 2020, arguing that it was necessary to expel migrants at the border to prevent the spread of COVID-19. The Biden administration continued the policy, but announced last month that it would end Title 42 on May 23. The Louisiana judge on Friday ordered the government to continue enforcing Title 42.

This order prevents migrants from submitting humanitarian asylum applications because when they cross the border they are immediately expelled by immigration authorities.