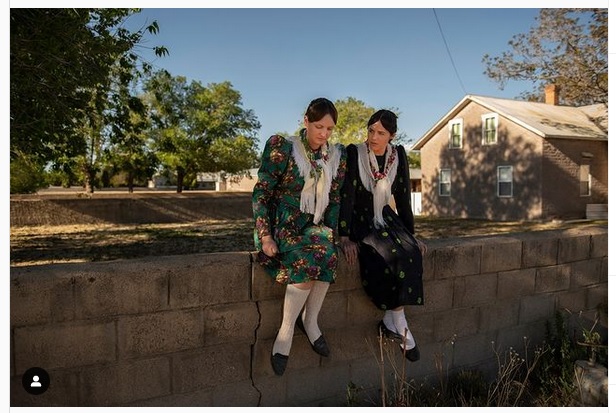 A rising TikTok star from a Mennonite community in Chihuahua, Mexico that once shunned rubber tires and electricity is now embracing technology to give a glimpse of her life through social media.

A century after her ancestors arrived, Marcela Enns, 30, shares anecdotes and answers questions from her more than 350,000 followers with a mixture of pride, humor, and sarcasm.

Known on social media as Menonita Mexicana, Enns tries to dispel misconceptions, such as that all Mennonites are religious fanatics or members of an ultra-conservative group cut off from civilization.

She describes her community as a “smoothie” — a blend of “conservatives” living frozen in time; “traditionals” who wear typical Mennonite clothes but also use technology; and “moderners,” who due to their appearance and lifestyle are not visibly Mennonites.

Despite their differences, all Mennonites “live happily as they are,” she says.

In her videos, she sometimes dances or mimes to Rihanna songs in a break with the customs of a community that in certain parts of Mexico still rejects the trappings of modern life.

In some of her videos shot in Ciudad Cuauhtemoc in the state of Chihuahua — where her ancestors settled in 1922 — she wears a traditional dress and a headscarf.

In others, she appears in modern clothes, sunglasses, and makeup, speaking in Spanish, English or Low German, the community’s native language.

Not all Mennonites have blue eyes and blonde hair, or shun all technology, she tells her followers.

“Often the documentaries that are made are about the most conservative groups and many people think that all Mennonites live like that,” she tells AFP in an interview.

Despite “all the videos that I’ve already made and all the content, many people tell me: ‘You can’t be a Mennonite because you have a cell phone and that’s impossible. I know that the Mennonites don’t use cell phones,'” she says.

A few hundred kilometers (miles) away in another Mennonite community, Sabinal, electricity arrived four years ago, followed by tires, cell phones, and the internet.

But no one yet has a television.

It was thanks to the fact that some young community members had access to the internet that the villagers discovered in 2020 that the world was facing a pandemic.

Avowed pacifists, they now ask visitors if the war is over yet in Ukraine.

The community used to have around 2,000 inhabitants, but the encroachment of modern life drove half of them away to the state of Campeche in southeastern Mexico.

Most of those who stayed were young people, he adds.

The women wear long dresses, sandals, and sometimes wide-brimmed hats — all made themselves.

Jacobo Brown, who runs a village store and a cheese factory, is happy with the changes.

“Now we use electricity for irrigation. It’s easier. And we put tires on the tractor to work more comfortably,” adds the 50-year-old, who does not yet know how to use wifi.

There are estimated to be roughly 100,000 Mennonites in Mexico, mostly in Chihuahua.

Although their roots are in the Netherlands and Russia, the first Mennonites that immigrated to Mexico came from Canada where they had learned English.

When they arrived a century ago, then Mexican president Alvaro Obregon “opened the door to them,” says Lawrence Taylor, a historian at Mexico’s El Colegio de la Frontera Norte.

They were allowed to have their own schools and exempted from military service, Taylor says.

Agriculture was their vocation and today their attachment to the land coexists with a gradual shift to modernity, encouraged in Enns’ case by the importance her family places on education.

“My grandfather was very rebellious,” she says.

As a result, her father was the first in his community to send his children to a public school.

Later, Enns went to Canada as an exchange student.

The influencer began to fall in love with technology at the age of 15 when she had her first camera.

Now, she manages the social media activities of two companies in Cuauhtemoc and, in addition to her TikTok account, also has 166,000 subscribers to her YouTube channel.

Enns, who describes herself as a feminist, praises the Mennonites for their industriousness and sense of solidarity and wants her popularity to motivate others.

“For me, it means breaking a lot of rules. I hope I can inspire other Mennonite women to be more independent, to be strong, and not be afraid to speak their minds,” she says.