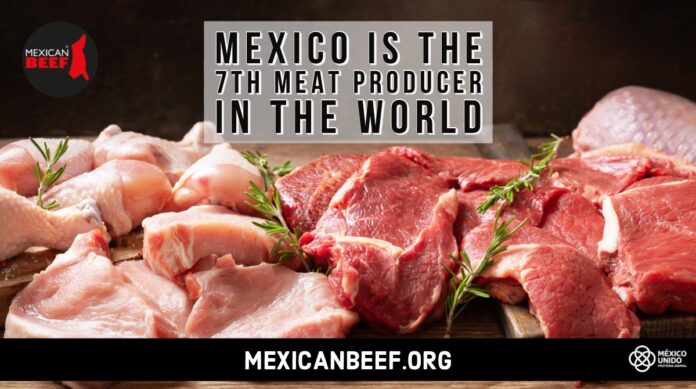 For the first time, Mexican ranchers managed to become the main foreign supplier of fresh beef to the United States, displacing Canada, which for years had been occupying that first place.

At the end of last week, the country’s farmers gave another boost by exporting 6,121 more tons of meat to the US market, reveal reports from the Agricultural Markets Consulting Group, taken from data from the US Department of Agriculture.

With this, the total volume of meat exported, from January 1 to February 11, 2022, to that country, rose to 37 thousand 93 tons, which meant 68.7 percent more than a year ago and 3.3 percent more than what Canada had also exported to that market, until Friday of last week.

As a result, the country’s producers reached a 26.9 percent share of beef purchases made by the US in January, this is one percentage point above their Canadian competitors.

Héctor Garza Garza, president of the Mexican Association of Beef Producers (AMEG), said that the greater dynamism of meat shipments to the US derives from the lack of personnel in the slaughterhouses and packing houses of the United States and Canada as a result of Omicron’s contagions.

He added that the foregoing has caused a drop in supply in the US market, which led marketers from that country to increase their orders to Mexico due to the uncertainty of when the US packers’ supply will return to normal.

“Indeed, we have already surpassed Canada as the first seller of beef in the market and, although we know that it is temporary, we hope not to move too far from them once they recover,” he said.

According to GCMA figures, Mexico and Canada account for 53 percent of US beef purchases abroad, with 27 and 26 percent, respectively.

I’ve been visiting Baja California and various states throughout Mexico since the 1970s and I have to say that I’ve had some of the best steaks of my life during those visits. This always struck me as odd, however, as during my travels I mostly saw only skinny cows living in arid desert environments with grass to be fed nowhere in sight. How do you get tasty beef from skinny cows that seem to live on cacti and pebbles? After scratching my brain cover on it for a few years I finally did some research and asked my computer, “Why is Mexican cow so tasty, bruh?”

I’m no expert on this subject. This is just what the computer said:

– “It’s a little earthier than conventional beef, maybe even floral,” says David Smith, executive chef at Criollo Latin Kitchen in Flagstaff, deconstructing it like a fine wine. “You can kind of taste the grass in it” — or mesquite and prickly pear, as it may be.”

-Most Mexican cattle are a Corriente or Criollo type

-The Corriente can be traced back to the first cattle brought to the new world by the Spanish as early as 1493 during Columbus’ second crossing.

-These cattle were hardy breeds chosen especially to withstand the ocean crossing and adapt to their new land. They were brought to the West Indies and South Florida, as well as Central and South America, including Argentina..

-Corriente are small, trim cattle, with sufficient bone and strength for easy action and endurance. Generally, a mature bull weighs less than 1,000 pounds, and a mature cow less than 800 pounds. The cattle are narrow with high withers and a short, peaked rump. They have a clean dewlap, deep girth, and high flank. Cows have neat, tight, trouble-free udders with small to moderate teats, and produce rich milk. Bulls have a tight sheath. A high, bushy tail switch and pronounced mane are notable characteristics.

-Corrientes fit the vision of the future rancher in that they are highly productive, inexpensive to care for, and resourceful foragers that utilize and benefit the environment as naturally as wildlife.

-With their small frames (800 lbs compared to 1200 lbs with European beef breeds), Corriente don’t wreak havoc with soft or muddy areas, such as around water holes. Overall, Corriente cattle have a positive, improving effect wherever they are pastured.

-Over the centuries the descendants of these cattle were bred for different purposes – milk, meat, and draft animals. They also adapted through natural selection to the various regions in which they lived, including arid desert regions. Eventually, their descendants spread across the southern U.S. and up the coast of California.

-Criollo cattle can be found throughout the Western Hemisphere and some Criollo have been developed into unique breeds, e.g., the tropically adapted Romosinuano of Colombia, one of the few polled Criollo cattle. Other Criollo cattle were responsible for the genetics that led to the Longhorn.

-Descendants of the original Spanish cattle, little influenced by modern breeds, pure Criollo cattle are now seen only in the remote parts of Mexico, although in the state of Sonora the term Corriente is more common, and in Baja California the word Chinampo is used. All these terms, meaning “common cattle” or “cattle of the country” are applied to more or less pure descendants of the Spanish cattle, as well as to the indiscriminate mixtures of these and more recently introduced breeds.

-In the early 1800’s, European and other breeds were introduced to the new world, and by the 1900’s many ranchers in the Americas were upgrading their herds with modern beef cattle.

-Criollo, genetically, are naturally tender. DNA testing of registered Criollos reveals that Criollo usually score at least 4 on the tenderness scale, with an average of 6.95. Kobe beef, by contrast, only averages 5.82 on a scale of 10; Black Angus averages 6.21

-DNA markers for Meat Quality (Marbling) indicate that Criollo are genetically programmed to be lean. Interestingly, (since their meat is predominantly red muscle fibers, rather than white muscle fibers as is found in the European beef breeds), Criollos are capable of marbling in a shorter feeding period than most other beef animals.

-DNA test results on Meat Quality (Marbling) of registered Criollo reveal that Criollo usually score at least 4 on the quality scale, with an average of 5.95. Kobe beef, by contrast, averages 5.20; Black Angus cattle score, on average, 7.01 on a scale of 10.

– In 1999, the Cattleman’s Texas Longhorn Registry led a study to determine the feasibility of a branded beef cooperative for cattle of Spanish descent (Corriente). The results were compared with two brands of beef available to the consumer, Certified Angus Beef (CAB), and Goldstar (GS). The trials were conducted by non-biased parties at New Mexico State University, West Texas A & M, and Clemson University. Conclusions of these studies indicated that Spanish descent cattle can finish appropriately in a feedlot setting and can produce lean, choice-grading carcasses.

The results of the tests –