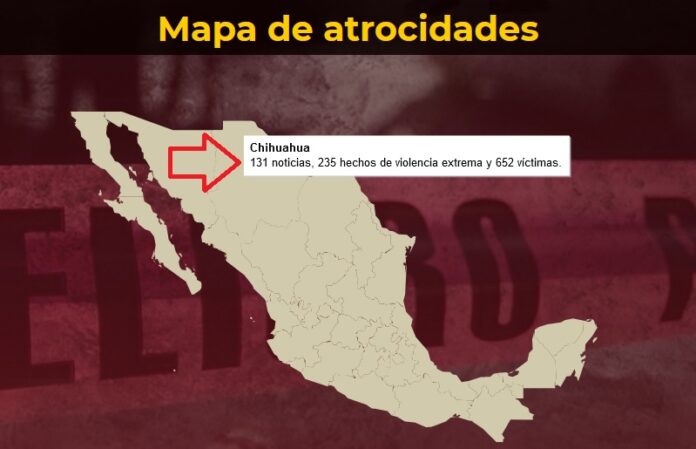 Chihuahua leads Mexico in a grim category: the number of murder or assault victims involving beheading, mutilation, torture, burning, and other forms of extreme violence.

More than 650 people have been victimized in such a manner this year in this state bordering Texas, according to the Mexico City nonprofit Causa en Comun (Common Cause).

Recent examples of “atrocities” in Juarez include the shooting deaths of seven people whose bodies were burned in September. Police have found at least one dismembered woman in February, June, August and September. Body parts have been found in trash bags, suitcases, garbage cans, and in coolers.

“The ‘hugs, not bullets’ (strategy) failed, no doubt,” Morera said on social media shortly after the release of the report. She recalled how Lopez Obrador recently responded to a question about police inefficiency by praising the army. “That is a summary of his non-strategy on public safety. […] where impunity, lack of security, and corruption prevail.”

Former Chihuahua Deputy Attorney General earlier declared that the use of extreme violence by the cartels is meant to intimidate rivals.

“These are messages that rival criminal groups utilize […] They think that by decapitating, dismembering or burning the bodies, their rivals will be afraid (of them),” the state official said. He added the “acts of terror” on the part of the cartels also include dressing up male victims in women’s clothes as an insult.

But Causa en Comun members say not all atrocities are perpetrated by the cartels. Plenty of women, in particular, suffer great bodily injury before being killed by their male partners.

“A good part of these atrocities are perpetrated by people who are not part of criminal organizations. The violence itself is criminal in nature, but it is also family violence, community violence, social violence,” the group says in its report.

The group is calling for police reform that includes training and accountability, crime-prevention campaigns, and expanded and affordable psychological services

More than 60 pounds of methamphetamine product of Mexico were seized at Alamogordo, NM