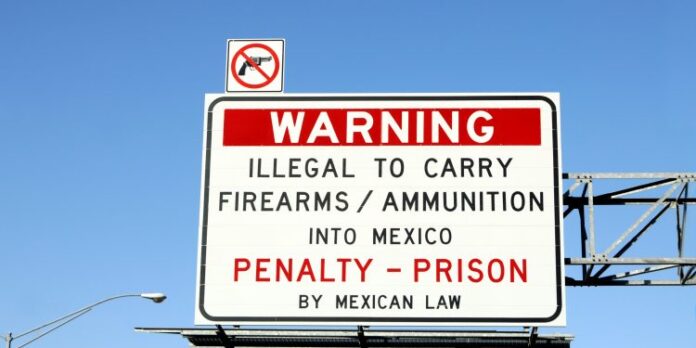 CIUDAD JUAREZ, CHIHUAHUA ( Newsweek).- Mexico has seen a record rate of illegal guns crossing its border from the United States, Border Report says, and officials believe these guns are contributing to the country’s high number of homicides amid drug cartel violence.

Despite estimated murder rates dipping with the onset of the coronavirus pandemic, the country’s homicide number remains at a historically high level. The most recent figures reported by World Population Review place Mexico’s homicide rate at 29 deaths per 100,000, well above the U.S. figure of five deaths per 100,000.

Mauricio Ibarra Ponce de León, Mexico’s consul general in El Paso, Texas, told Border Report that part of the reason for this phenomenon is that the drug cartels have been able to get their hands on firearms, despite the nation’s strict gun laws.

“We estimate that half a million weapons are trafficked from the U.S. to Mexico every year,” Ibarra told Border Report. “The problem is that all this weaponry is getting to the criminal organizations, giving them very strong firepower to commit all kinds of crimes.”Newsweek Newsletter sign-up >

Mexico’s gun laws are far stricter than that those in the U.S. The country has one army-run gun store that issues a few hundred licenses each year. Most firearms used in Mexico do not originate in the country.

Data gathered by the U.S. Bureau of Alcohol, Tobacco, Firearms, and Explosives shows that seven out of 10 guns in Mexico can be traced back to the United States. Rather than entering the country by truck or plane, the guns are purchased in border states like Texas or California by individuals who visit gun stores repeatedly, according to Border Report.

To combat this, Mexico has filed a suit directed at American gun manufacturers in a Massachusetts federal court, in hopes of achieving greater accountability.

Recently in El Paso, a case file details how one local man allegedly purchased 49 guns and rifles from 12 dealers and was caught attempting to bring them to Mexico shortly afterward.

“We have never meddled with the Second Amendment. This is not against the rights of the people of the United States to buy and own a gun,” Ibarra told Border Report. “We [sued] gun manufacturers and distributors we believe are engaging in negligent commercial practices because they know the weaponry they produce is being trafficked to Mexico and is being used in criminal activity.”

The civil case in Massachusetts will be heard on November 22.