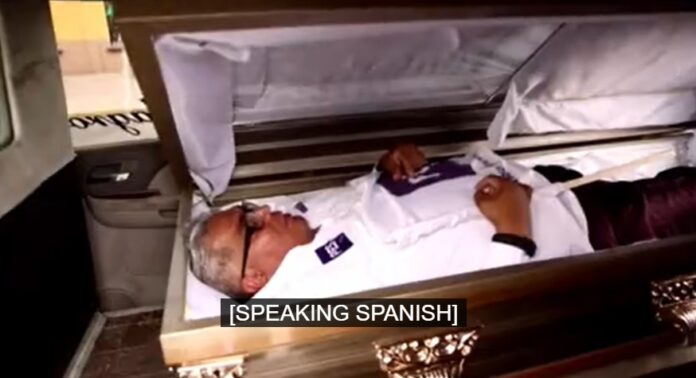 In the city of Ciudad Juarez, Chihuahua, Mexico, one of Mexico’s congressional candidates staged a funeral to kick off his election campaign highlighting deaths from COVID-19 and crime and a message:

‘If I don’t deliver, let them bury me alive’

”I am going to represent a city drenched in blood that today is going to say: ‘Enough with politicians who keep silent and thus become accomplices of organized crime'”.

Carlos Mayorga, a candidate for the Solidary Encounter Party (PES) in the June 6 elections, arrived at an international bridge between the northern border city and El Paso, Texas, on Tuesday morning inside a coffin transported by a hearse.

Video footage shows men kitted out in full personal protective equipment (PPE) removing the gold-colored coffin from the hearse and placing it on a table.

Apparently speaking from inside the casket as it is being removed, Mayorga says: “Representing a dead city, we need a real awakening.”

Assisted by one of the PPE-clad “undertakers,” the candidate, a former television presenter, rises from the “dead” and, without even a hint of a smile in acknowledgement of the absurdity of the situation, begins a prepared speech.

Footage of Mayorga’s mock funeral went viral on social media — as was undoubtedly the aim — where criticism of the candidate easily outweighed praise.

“This is how Carlos Mayorga of the PES [an ally of the ruling Morena party] begins his campaign: mocking the deaths of more than 200,000 Mexicans due to the pandemic,” one Twitter user posted to his more than 70,000 followers.