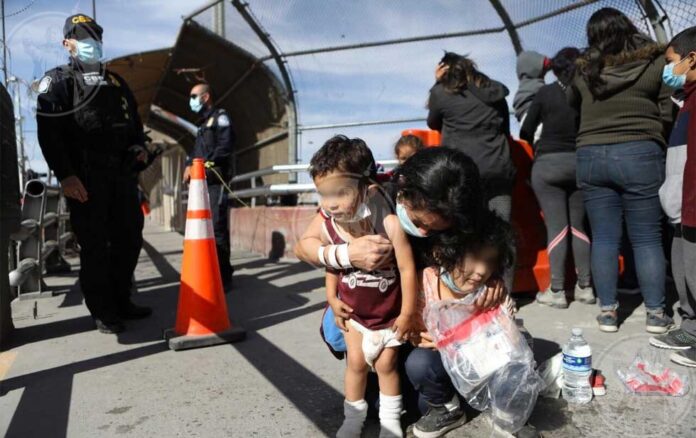 Ciudad Juárez, Chihuahua— “They deceived us, they told us that they were not going to deport us, that they were going to release us and that we were going to our relatives,” she said through tears and sitting on the floor hugging her two children in front of the agents of Customs and Border Protection (CBP) Vilma Iris Peraza López, who yesterday was part of the largest group of migrants that the United States has expelled under Title 42 to Ciudad Juárez.

According to US agents themselves, yesterday there were 250 Central American foreigners sent to Mexico through the Paso del Norte-Santa Fe international bridge by the Government of Joe Biden, after the almost 300 that the city received on Monday, Tuesday, and Wednesday.

The natives of Guatemala, Honduras, and El Salvador crossed the borders between Reynosa and Miguel Alemán, Tamaulipas with McAllen and Roma, Texas, where they were detained for days, until yesterday morning they were awakened at dawn and after the argument that they would be transferred to a shelter, with their relatives or another detention center, they were put on a plane and taken to El Paso, according to their own accounts.

“We had 400 on the planes … why did they deceive us?” Asked a migrant at the international crossing to the US agents, after five trucks arrived from the airport at the Border Patrol station and soon after they began to be sent to Mexico in groups.

Upon seeing the flags of Mexico, Vilma Iris realized that she was no longer in the United States, so she began to cry, while her five-year-old daughter Adriana vomited in front of CBP agents.

“I do not know why she vomits … she has profound anemia, and since she has not eaten, it may be that she is dehydrated and has not eaten since yesterday,” said the Honduran crying after kneeling and hugging her five and two year old children sitting on the floor in front of to US agents.

Vilma paid 12 thousand dollars to a human trafficker to be transferred from Honduras to Guatemala, then to Chiapas, Tabasco, and Nuevo León until she bequeathed Miguel Alemán, Tamaulipas, where she crossed to the United States, with the aim of reuniting with her husband, who has not seen for two years.

“I don’t know why he did this to us, why to us? They took our fingerprints, then they took us to the iceboxes (detention center) for four days, then they told us that they were going to take information from us to call our relatives who they were going to receive us. Then they put us on a bus, then on a plane, then on another bus and they didn’t tell us we were coming here at any time, nor did we sign deportations, nothing, nothing. I only ask the Government of the United States to give me a single opportunity, because my daughter does not know her father, and we went with the illusion of giving the children a better future, “said the woman.

The young 28-year-old mother claimed to have seen on the Honduran news that the United States border was open to children under the age of six, so she decided to go in search of the so-called “American dream” with her husband. , in Tennessee.

Like Vilma Iris, the rest of the expelled migrants claimed to have realized they were in Mexico until they were taken by Border Patrol agents to the international crossing, where they saw the Mexican flags.

The express expulsion of migrants through Title 42 of Section 265 of the United States Code, which leaves people without the opportunity to request political asylum, began on March 20, 2020, by the Republican government of Donald Trump, and currently continues through the Democratic administration of Joe Biden.

Under the argument of the risk of the spread of Covid-19, all the people who enter the neighboring country illegally are returned to Mexico, dozens of them, every day to this border. However, yesterday the largest expulsion in the city was recorded.

“It is a health program, not migratory,” said Enrique Valenzuela, general coordinator of the State Population Council (Coespo), which depends on the Center for Comprehensive Attention for Migrants (CAIM), whose staff went yesterday to the international bridge to transfer migrants to their offices and provide guidance.

According to the state official, almost half of the people who are arriving expelled from the United States are minors under six and eight years old who travel with their parents, deceived by the “coyotes”, before the opening of the border for migrants who They have up to two years in the city and were returned by the Donald Trump government under the Migrant Protection Programs (MPP).

Unlike MPPs, those who are expelled by Title 42 do not have an appointment before a United States Immigration Court; dozens are returned through this border without having crossed here and are not notified that they will be returned to Mexico.

Marisa Limón Garza, deputy director of the Hope Border Institute, a US organization that supports migrants in Ciudad Juárez, stressed that “it is illegal to deny these people access to asylum on either side of the border.”

Yesterday, at CAIM, the migrants received fruit, water, and pizzas that were taken in an improvised way, since the United States had not informed them the number of migrants it would expel.

Dirvin García, CAIM coordinator, also explained to Central Americans that the United States border is closed and that they currently have no possibility of obtaining political asylum in the neighboring country.