The man lost his board after hitting a big wave, however, he was able to swim to the rocks; no boat could approach because it was a rocky area

A surfer was rescued alive and in good health, when he was trapped on a rock after hours of losing his board due to a strong wave in Punta Cabras about 40 miles south of the Port of Ensenada, Baja California.

The action took place when the Ensenada Naval Search Rescue and Maritime Surveillance Station (ENSAR) received a call from the Control, Command, Communication and Computing Center (C4) , where a male person was reported who he would have had an accident while he was doing surfing activities, losing his board and due to this situation he remained subject to a rocky area where the rocky conditions prevented any boat from approaching for his rescue.

For this reason, the Regional Search and Rescue Plan was activated, taking off a UH-60 Black Hawk aircraft belonging to the 221st Naval Air Squadron and the departure of a Defender-class vessel from the Ensenada Naval Search Rescue and Maritime Surveillance Station.

In a video released by the Secretariat of the Navy of Mexico, a rescuer was observed descending from the helicopter with a cable to the rocky area where the surfer was, after some attempts, the sailor held the man, tied him to the cables and both were loaded onto the aircraft.

After the rescue, the surfer was treated by Naval Health personnel, while he was transferred to the Hospital.

The rescued person only had symptoms of mild hypothermia and light blows from the waves and when climbing the rocks that prevented him from drowning, so he did not require medical attention and he left the place on his own

In November they rescued a family

The Secretariat of the Navy-Navy of Mexico, as the National Maritime Authority and acting as the Coast Guard, through the Second Naval Region, reported that on November 6 it carried out the rescue of four Mexican and American crew members, who were on board of a vessel less than 8 nautical miles approximately (15 kilometers) south of Ensenada, Baja California.

The action was carried out after receiving an alert from the Control, Command, Computing and Communication Center of Ensenada, BC; where they reported that a minor boat with three adults and a minor had faults in its propulsion system and that the effects of the wind and waves were lowering (directing) the boat to a rocky area. Therefore, the Regional Search and Rescue Plan was immediately activated, ordering the departure of a Defender-class vessel belonging to the Naval Search, Rescue and Maritime Surveillance Station (ENSAR) of Ensenada, in order to provide the requested support. 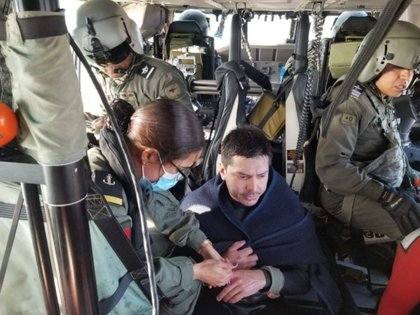 On the aircraft, he was treated by rescue personnel, however, he only had mild hypothermia and scratches from the rocks Photo: (Facebook Sentinela México)

Upon arriving at the scene, naval personnel rescued the three adult crew members, as well as a minor; to later transfer them by sea to the dock of the Second Naval Region, where Naval Health personnel were already waiting for them to provide medical attention, reporting their health as stable.

It should be noted that it was coordinated with the corresponding immigration authorities, so that the crew members left by their own means; On the other hand, because the smaller vessel represented a danger to navigation, it was towed to the dock of the Second Naval Region. 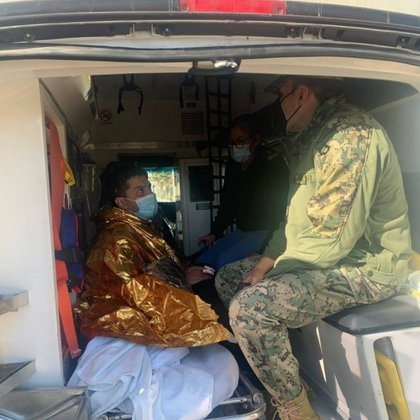 He was also checked by paramedics and was transferred to a hospital for more detailed analysis Photo: (Facebook Sentinela México)

Last year this Second Naval Region through the Naval Search, Rescue and Maritime Surveillance Station (ENSAR) Ensenada, has carried out 109 rescues to citizens, to safeguard human life at sea.

Through its 33 Naval Search, Rescue and Maritime Surveillance Stations distributed on both coasts of the country, personnel from the Secretariat of the Navy (Semar) rescued 505 people at sea during 2020 and carried out the medical evacuation of 77. 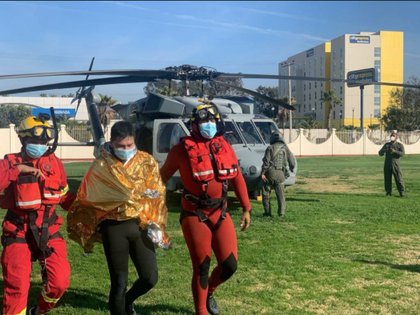 The surfer was in good health and went home by his own means Photo: (Facebook Sentinela México)

Likewise, it supported 85 vessels of various types and functions that presented technical problems or difficulties due to inclement weather.

The unit under the command of the admiral, José Rafael Ojeda Durán, highlighted that the Naval Search, Rescue and Maritime Surveillance Stations, operated by more than 500 naval elements in the Mexican Pacific, Gulf and Caribbean, are equipped with everything necessary to carry out operations search and rescue at sea.