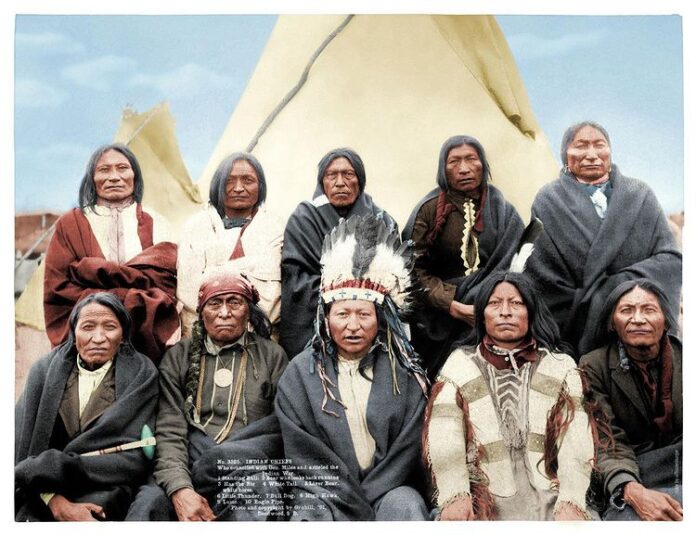 The Apaches are found in Durango, Coahuila, and Chihuahua and are part of a history hidden in textbooks.

The Lipan Tribe is made up of warriors and they seek to protect their Apache identity, culture, traditions and customs.

Since 1700 the Nde or Lipán-Apache ethnic group-nation was established in Coahuila. They arrived from Texas due to the bison migration, as they were hunters of this species. Although also the war against the Comanches (a Texan tribe) the smallpox epidemics, factors that led the Lipanes to arrive in the state, particularly in the municipality of Ocampo.

The Ndé come from the center of the earth, from a place underground to the Blue Lake or “Blue Lake”, located in the Sierra de la Sangre de Cristo, between Colorado and New Mexico, according to their own beliefs, from there they emerged and were received by Isdzaa Naadlééhi (The Changing Woman) and her warrior sons.

The Lipans chased buffalo and deer to hunt, plant food that could be gathered, and fertile riverbanks where they could plant corn and squash, all the way from southern Canada. As they migrated south, they settled in Texas and then Mexico.

The Abááchi Nan?dant Pica?x Nde in Tiinsle unified the Lipan and had control from southwestern Kansas north to southeastern Coahuila and north to Durango. He bartered buffalo skins in Torreón, Coahuila, and was respected by the Toboso, Huachichiles, and Coahuiltecos chiefs.

The Lipan Apaches found buffalo and deer, cactus and agave prickly pears, wild plums in the area that goes from Coahuila to Texas. They claimed the San Antonio area as their homeland and called it Many Houses, the Lipan language: Ki-aah-hii. Despite all the problems they have historically faced, the one that seems most alarming to him is the disappearance of culture, and the loss of the language and identity of his people.

The Nde are scattered throughout Coahuila and Chihuahua and although they are not a proper tribe, they have been part of the history of Coahuila and Mexico for more than 300 years. Although it has only just begun to be looked at, because these tribes are not mentioned in textbooks or official history, despite the fact that they faced bloody battles against the Comanches and the United States Army, in the invasions they made to our country, such as the battle of the whirlpool

That is why they now seek to be recognized as part of the history, culture and indigenous Mexican languages, to be included in cultural activities, in the promotion of the language, in the catalog of indigenous languages ​​of the north and the rescue of the Lipán-Apache culture and language; endangered language.

Caring for nature is an essential part of the Lipan-Apache ethnic group-nation, since they belong to Ni?güdzaan (Mother Earth) and protect it. The Lipanes-Apaches have been one of the ethnic groups that have most adapted to the changes in the times they have lived. They are managed through social networks, where meetings are called and held at least once a year.

As the word “Apache” comes from the Zuni word “apachu”, enemy, a name with which the Spanish, English, and French stigmatized the tribes that occupied the southern United States and northern Mexico, they prefer to consider themselves Ndé or “the people”.

For many years they have been considered rebels and barbarians, since they did not cooperate with the conquerors, for refusing to forget their lands and their traditions. Today, the ethnic groups have struggled to maintain their customs by sharing their ancestral wisdom. They are no longer nomads and isolated, and after the persecution, they had to face a lack of respect for their people.

Today the Lipans are the last Apaches in the country; lipan means “the light gray people”. This comes from the lipan word for a light gray color (kleh-pai) and the word for people or tribe (indeh or ndé). Rather than being just the name of the tribe, it contains a code commemorating the exodus of the Lipan Apache from Canada’s McKenzie Basin to their eventual homeland of Coahuila and Texas.

Today, this tribe is working to develop a theme park in Cuatro Ciénegas and a reserve in Químicas del Rey. The Apaches in Mexico have a large presence in the northern states of the country and it is of great importance that they achieve recognition with the state government and give credibility to their nation.