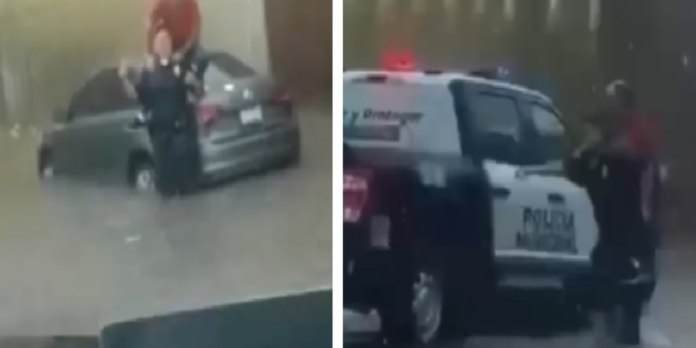 The Chihuahua police did not hesitate to rescue a grandfather trapped in his car during a flood. He carried it as a piggyback to put it to safety.

A policewoman from the capital of Chihuahua went viral for the heroic rescue she carried out during the floods.

Officer Brenda Arzaga Loera did not hesitate to help an older adult who was trapped in his car in the middle of a flood .

He walked up to it and “piggyback” carried it to prevent it from getting wet or hurting itself.

Brenda recounts the moments they lived through: “I also remembered that there were some unevennesses on that ridge, so I decided to get off my patrol car. The gentleman did ask me for help, he asked me to help him get closer with him, the same if I told him to let me. since I had remembered that there were some sewers along my fear was that they were open, that was my concern. The gentleman told me that he was going to go up to the awning, I told him that it was perfect that he give me the opportunity to get there with him. To which I suggested that he climb on my back, the truth was easy for me, I did not think that he weighed so much, I already wanted the citizen to be safe ”.

And so it happened, the man climbed “on a piggyback” on the back of the police officer, she walked through the water until she reached her patrol car. There the grandfather was able to get into the unit and be completely safe.

Who is the heroic Chihuahua police?

Brenda Arzaga Loera is a graduate in criminology, with a criminal specialty, she always wanted to work in the field and her goal is to help people.

In addition to his day-to-day caring for an entire city, he also has a duty at home.

“Well, Brenda takes care of her father, we have a father who is already advanced in age among my uncles and brothers, we take care of my father and he is our main priority right now at home,” says Brenda.

Officer Brenda hopes to continue doing her duty, with the human touch she brings to her profession every day.