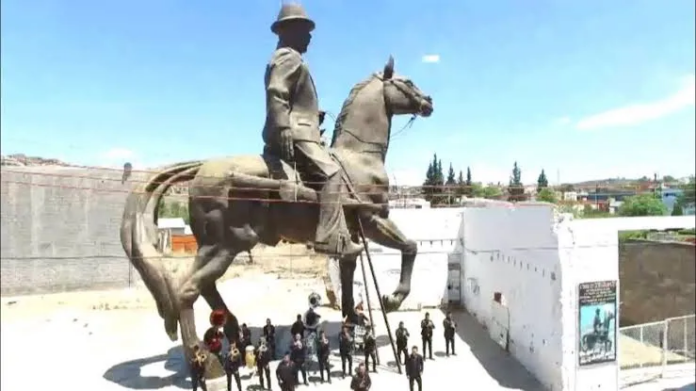 Both in Mexico and abroad there are monuments to the General of the Northern Division, Francisco “Pancho Villa”, some of them are in Zacatecas in the Cerro de la Bufa where a battle was fought where General Felipe Ángeles mainly participated. , other sculptures in the state of Coahuila and his native Durango.

However, none like the one that took place a few years ago in the city where the General was killed in an ambush, which many historians say was carried out by Álvaro Obregón’s own federal government, which saw Villa as a threat because of his popularity.

This city is the so-called “Capital of the world”, in the south of the state of Chihuahua, Hidalgo del Parral, a former mining city where even Villa worked as a worker, butcher, and milkman, among other trades from a very young age.

It is in Parral Chihuahua, where the equestrian statue of Villa was finished. The author of the work is the Chihuahuan sculptress Lourdes Trevizo. 14-meter sculpture, which together with its pedestal will reach 24 meters in height.

The equestrian statue of General Francisco Villa is located on a hill on the outskirts of that mining city. And some say it is the largest bronze sculpture in the world.