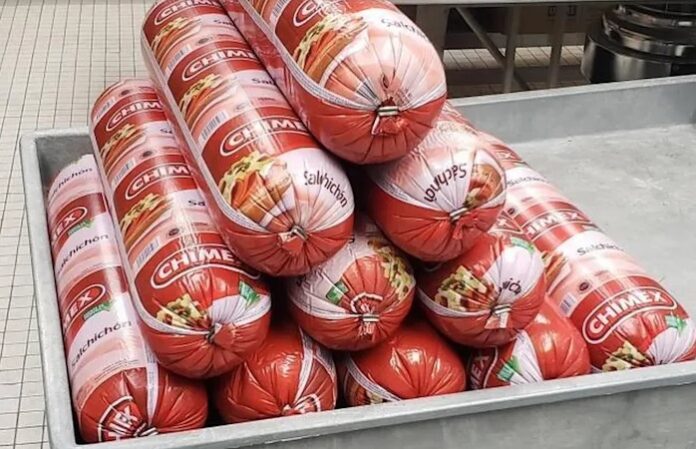 CIUDAD JUAREZ, CHIHUAHUA.- Over 200 pounds of illegal pork bologna were seized by border agents in two unrelated incidents in which Americans tried to smuggle the meat into the country, Customs and Border Protection agents said.

These unregulated pork products can introduce diseases from animals, which can harm the farm industry in the United States, a CBP news release said.

The first incident was on Feb. 25, when an El Paso, Texas, married couple in two different vehicles tried to cross the Bridge of the Americas, the release said.

The husband, a 23-year-old, was referred to an inspection, which revealed rolls of prohibited bologna inside the vehicle, the release said. He told officials a friend paid him to smuggle the bologna.

Soon after, CBP officials discovered more bologna hidden inside the vehicle his wife was driving. A total of 110 pounds of the pork were confiscated from the couple, officials said.

The second incident was at the Santa Teresa border crossing on Feb. 28, the release said. A 59-year-old New Mexico man’s vehicle was inspected after he didn’t declare any meat products.

During a second inspection, officials found “anomalies” in the back of the vehicle, the CBP release said. A search uncovered 13 rolls, or 120 pounds, of prohibited bologna.

All individuals involved were given civil penalties for “failure to declare commercial quantities of bologna.”

“People will sometimes make light of these seizures but there is nothing funny about these failed smuggling attempts,” CBP El Paso Director of Field Operations Hector Mancha said in the release.

Earlier this year, CBP agents found 243 pounds of contraband bologna at the border, McClatchy News previously reported. Those individuals were planning on reselling the illegal pork