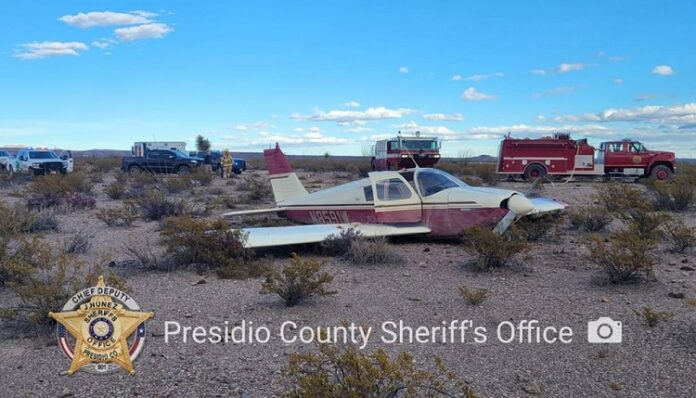 An airplane carrying smuggled migrants crashed in the West Texas desert and the pilot — a Texas man — ran from the site, abandoning severely injured passengers, according to the Presidio County Sheriff’s Office.

And he’s still at large.

Carrying six passengers, the four-seat aircraft was under-fueled and overloaded, investigators said. Extra weight, plus low fuel, helped bring the plane down north of the Presidio Lely International Airport around 3:50 p.m. on Dec. 30.

Presidio sits on the Texas-Mexico border near Big Bend National Park, about 60 miles south of Marfa.

Police say Tobias Penner Peters was attempting to transport the individuals from Presidio to another location in the U.S., but he lost control of the plane. Many were injured on impact but Peters managed to flee the scene of the “smuggling attempt gone wrong.”

While Peters escaped, he probably didn’t walk away unscathed, according to the sheriff’s office. He likely suffered serious head trauma and may have also lost one of his eyes.

Peters is described as 6 feet, 2 inches tall, and weighing about 185 pounds, with blue eyes and red hair, police said. He has properties in Seminole, Texas but sometimes travels to Ojinaga, Mexico, across the border from Presidio.

The sheriff’s office has warrants out for his arrest on charges of felony human smuggling, evading arrest, and deadly conduct.

Anyone with information on Peters’s whereabouts is encouraged to call the Presidio County Sheriff’s Office at 432-729-4848.