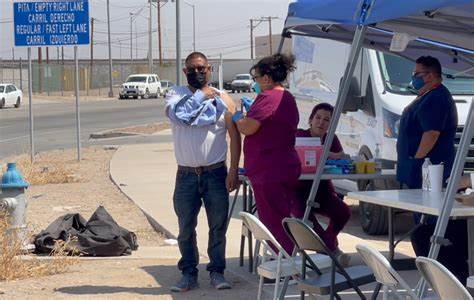 EL PASO, Texas (Border Report) – Isaias Ruiz has been crossing the U.S.-Mexico border almost every day since the COVID-19 pandemic started, but it was not until Tuesday that he finally got vaccinated.

“Thank God my family didn’t get COVID,” said the trucker from Juarez, Mexico. “With (the vaccine) we make sure we’re not going to infect more people. It’s a safeguard for the community of Juarez and El Paso.”

Ruiz was among dozens of Mexican truckers who stopped by a roadside COVID-19 vaccination tent near the Ysleta-Zaragoza International Bridge to get a free shot of the one-time Johnson & Johnson vaccine.

The tent is run by the city of El Paso and is one of the tools local officials are using to prevent the cross-border spread of the disease that has killed a combined 6,173 El Paso and Juarez residents in the last 16 months.

More than 800 truckers have received a vaccine since June 14, according to Laura Cruz-Acosta, a city spokeswoman.

Truckers like Luis Rey are key to transporting parts assembled at manufacturing plants in Mexico to factories and distribution centers in the United States. As essential workers, they’re exempt from the land borders travel ban in effect since March 2020. Between 800 and 1,000 of them come across every day, city officials said.

But many of them interact with warehouse hands and make two to three trips a day between El Paso and Juarez, stopping to have lunch, pump fuel and buy water at convenience stores.

El Paso is a nationwide leader when it comes to vaccinating its people, with 61.8 percent of its population 12 years and older fully vaccinated and 74.2 percent getting at least one dose. Juarez’s vaccination rates are not readily available, though experts on both sides of the border admit it lags far behind.

Baltazar Rea, a Juarez resident, said he waited less than 10 minutes on Tuesday to get a shot at the roadside tent by the Zaragoza Bridge.javascript:false

“It was very quick. That’s good because I don’t have too much time,” he said, adding that he spotted a sign as he drove by advertising the vaccines, then saw several trucks parked by the side of the road and decided to stop as well.

El Paso County officials, meantime, are trying to set up a similar station at the Tornillo, Texas, border crossing so that Mexican factory workers can be allowed to show up at the border and get a free vaccine.

County Judge Ricardo Samaniego on Monday said Juarez plant managers are willing to absorb the costs, but a formal mechanism is yet to be established. Samaniego was to meet with plant managers prior to a Friday special meeting of El Paso County Commissioners Court to discuss the issue.