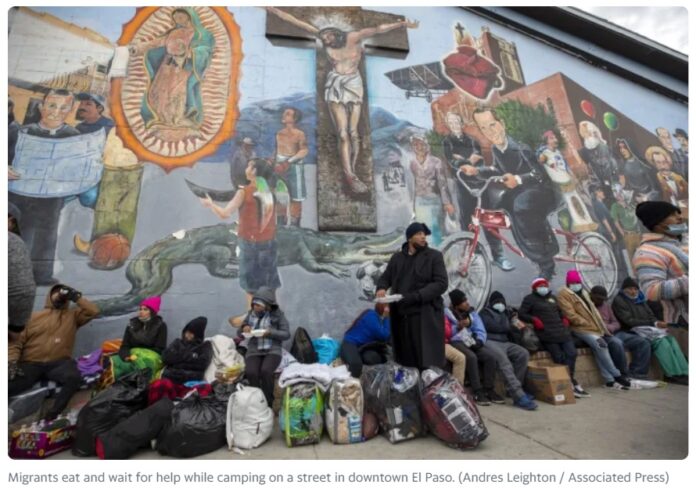 CIUDAD JUAREZ, CHIHUAHUA.- The first time Mari Marin Bastidas tried to claim asylum at the U.S. border, she was turned away by authorities who said a policy instituted to slow the spread of COVID-19 meant her case would not even get a hearing.

Dejected, she returned to her home in the state of Michoacán in western Mexico.

Two years later, she is back at the border to try again. Word has been spreading that the policy — known as Title 42 — is about to be lifted.

“I decided to come because of the opportunity that is opening up,” said Bastidas, 29. “I’m not going back anymore.”

The fate of the policy now rests with the U.S. Supreme Court as anxiety and confusion build on both sides of the border. In Ciudad Juarez, untold numbers of asylum seekers have been gathering in recent weeks. Across the Rio Grande in El Paso, the mayor has declared a state of emergency in anticipation of a massive influx.

Bastidas, along with her 8-year-old daughter and two brothers, were among scores of migrants waiting along a narrow section of the river.

Some waded across to present themselves to border agents, either not realizing that Title 42 was still in effect or willing to take their chances anyway.

Bastidas and her family decided to wait and made their way to a migrant shelter nearby. They had $500 to carry them over for now.

They plan to claim asylum based on a fear of a local gang that she said had threatened her family for failing to pay a monthly extortion fee of roughly $400. Another brother had been murdered several years ago by gang members running a similar scheme.

Before Title 42, the United States considered all asylum claims, which often meant releasing migrants into the United States until a court rules on their cases — a process that can take years because of a large backlog. A small minority of asylum claims are ultimately accepted. Fleeing poverty is not a valid basis for a claim.

Under Title 42, a decades-old public health measure that the Trump administration resurrected in the early days of the pandemic, asylum seekers can be quickly expelled.

The Biden administration has opposed the policy in court while continuing to use it with help from Mexico, which agreed to accept Central Americans, and later Venezuelans, who the United States turned away.

But last month, a federal judge ruled that Title 42 was being used arbitrarily and was no longer justified as a pandemic health measure. He ordered it be lifted by Dec. 21.

Some 19 Republican-led states appealed to the Supreme Court, arguing that ending the policy would result in a surge of new migrants, and on Monday — two days before the deadline — Chief Justice John G. Roberts Jr. ruled that it would remain in place until the court decided the case.

If the policy falls, it is possible that the Biden administration could find new ways to limit asylum seekers.

Still, El Paso has been bracing for the day when asylum seekers can no longer be summarily turned away.

At one popular crossing spot along the Rio Grande, members of the Texas Army National Guard lined the riverbank with razor wire this week as a deterrent, and were standing watch next to their Humvees.

But already, 1,500 migrants a day on average are being taken into border patrol custody in the El Paso region, according to the Department of Homeland Security. After their fingerprints and basic information are recorded, many are expelled under Title 42. Some may be transferred to an immigration detention facility.

Others who might qualify for a Title 42 exemption — usually on humanitarian grounds or because Mexico limits how many migrants it accepts from various countries — may be released and allowed to remain in the United States, often with a court date.

This week, more than 50 migrants were staying at the Annunciation House shelter just north of the border. With cots in the chapel and playroom, the shelter has room for 60.