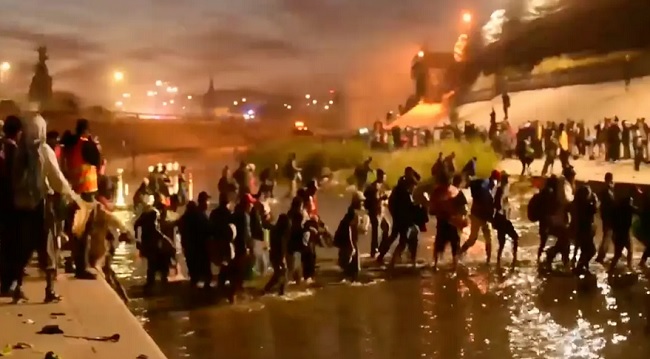 CIUDAD JUAREZ, CHIHUAHUA.- Hundreds of migrants were spotted on Sunday, December 11th, around 9 o’clock at night, crossing illegally from Ciudad Juarez, Chihuahua into El Paso, Texas, through the U.S.-Mexico border.

A massive line of migrants was waiting to be taken into custody by Border Patrol, and more migrants are on the way.

In a 24-hour time span from Friday to Saturday, the El Paso sector had more than 2,600 migrant crossings.

Prior to these border crossings, Mexican police escorted nearly 20 buses full of migrants into the Mexican city of Ciudad Juarez, which is located across from El Paso. The Police released the migrants to various non-governmental organizations.

The migrants then walked from the non-governmental organizations and crossed illegally into El Paso.

Video recorded by a passenger inside one of the migrant buses shows their Mexican police escort.

A photograph also displays part of the massive group of migrants walking to the border after they were dropped off at non-governmental organizations in Ciudad Juarez.