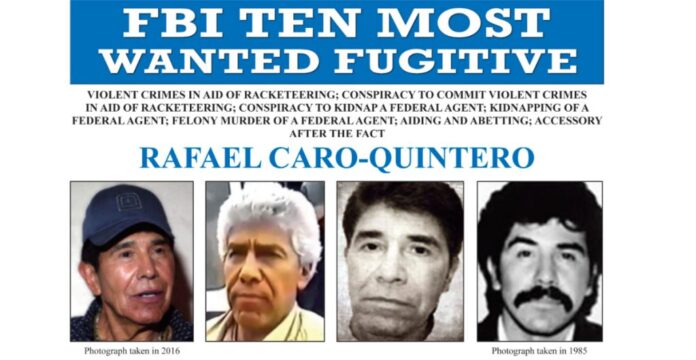 The so-called “Narco de Narcos” was the founder of the Guadalajara Cartel in the 1980s. In addition, he became an “enemy” of the DEA after the death of agent Kiki Camarena.

This Friday, July 15, Rafael Caro Quintero was arrested in Guachochi, Chihuahua. Those responsible for the capture were elements of the Secretary of the Navy of Mexico (Semar).

Who is Rafael Caro Quintero?

Rafael Caro Quintero was the leader of the extinct  Guadalajara cartel , and was the most wanted fugitive by the DEA ( Drug Enforcement Administration) .

These are the reasons why Rafael Caro Quintero was wanted

How much is the reward that the DEA offered for Caro Quintero?

The DEA offered 20 million dollars to anyone who gave information about the Mexican drug trafficker.

He is considered one of the most famous drug traffickers in Mexico, which is why he was nicknamed ‘El Narcro de Narcos’ during the 1980s.

He was arrested in 1985 in Costa Rica, accused of the murder of DEA agent Enrique Camarena Salazar and his pilot Alfredo Avelar.

After spending 28 years in prison for various convictions, he was released on August 9, 2013, by resolution of the First Collegiate Criminal Court of the Third Circuit in Jalisco, arguing that he should not have been prosecuted in federal jurisdiction for the murder. of the DEA agent.

On January 16, 2015, he was again found guilty of the murder of Enrique Camarena by a Federal Court and a new arrest warrant was issued against him.

It is a strong blow to drug trafficking: former head of operations of the DEA

The reward that the United States has offered is the largest reward that has been offered for a drug trafficker, ”he said in an interview for Milenio Televisión.

In addition, he sent congratulations to the Secretary of the Navy, whose elements carried out the arrest of the capo.”I congratulate the Navy, Mexico for having captured Caro Quintero,” he mentioned.