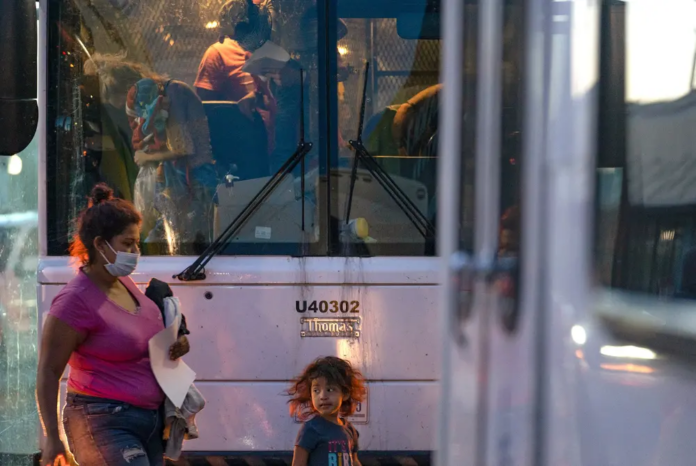 Governor Abbott ordered the Texas Division of Emergency Management to prepare to use buses to transport migrants released by the Biden administration to Washington, D.C.

“To help local officials whose communities are being overwhelmed by hordes of illegal immigration who are being dropped off by the Biden administration, Texas is providing charter buses to send these illegal immigrants who have been dropped off by the Biden administration to Washington, D.C.,” Governor Abbott said during a press conference on Wednesday afternoon in Weslaco, Texas.

The governor said the first drop-off location will be the U.S. Capitol steps in the nation’s capital.

“We are taking them to the United States Capitol where the Biden administration will be able to more immediately address the needs of the people that they are allowing to come across our border,” the governor added. The governor signed the letter to TDEM Chief Nim Kid ordering the action.

“Texans have a backbone and the will to secure our border,” Abbott stated. “Two things that Joe Biden does not have.”

The governor said the Biden administration and their NGO partners are already putting migrants on buses and taking them to San Antonio.

“I’ve got a better idea,” he explained. “Instead of busing these people to San Antonio, let’s continue the ride — all the way to Washington, D.C.”

Breitbart Texas first reported the administration’s plans to end the Title 42 program put in place by the Centers for Disease Control and Prevention during the Trump administration. The move is expected to bring a massive spike in the already record-setting number of migrants illegally crossing the border from Mexico into the United States.

Texas Congressman Michael McCaul (R-TX) told Fox News on Wednesday that the administration is anticipating approximately a half-million migrants to cross the border in the weeks following the end of Title 42.

Most released migrants are being let go with no Notice to Appear or court date under a program called Alternative to Detention. Officials disclosed in a DHS Southwest Border Mass Irregular Migration Contingency Plan first reported by Breitbart Texas’ Randy Clark that they would expand the ATD program while admitting “there is no evidence that a higher percentage of noncitizens will report for removal proceedings in the future if released, regardless of how expeditiously they are processed.”

In the Critical Assumptions section of the plan, officials stated:

Current pathways to removal will be limited. Component use of broadscale release mechanisms (i.e., Own Recognizance (OR) with issuance of a Notice to Appear (NTA), or parole and Alternatives to Detention (ATD) with administrative tools are necessary to ensure humane and efficient treatment of migrants.

The footnote for this section clarifies that officials believe the traditional screening processes will become overwhelmed and DHS will focus on “increasing broadscale release techniques.”

Abbott’s response will be to offer as many of those released into Texas a bus ride to the nation’s capital.

Below is a copy of the DHS Southwest Border Mass Irregular Migration Contingency Plan draft.