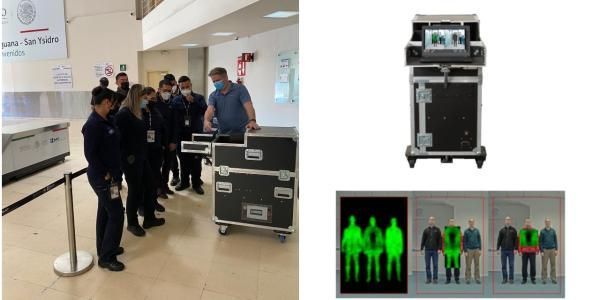 The United States government made a donation of six scanners for pedestrian inspection at the El Chaparral, Tijuana Puerta Este, and Mexicali I Land Ports of Entry, through its Embassy in Mexico and the Consulate General in Tijuana, which will be operated by the Tax Administration Service (SAT).

The scanners operate with passive thermal technology and are used in these types of ports of entry to identify illegal and dangerous objects, such as drugs, weapons, cash, or other types of contraband, that individuals may carry with them when entering Mexico.

Something that highlights these devices is that they perform said detection while pedestrians are in motion, so it does not represent more time to transit through the facilities.

The equipment delivered is part of a comprehensive donation for the northern border of Mexico, which also includes Ciudad Juárez, Nogales, Nuevo Laredo, Tijuana, and Mexicali, and is in addition to previous donations, among which is mobile detection equipment, canines, and other cargo detection equipment, that the United States government has granted to the SAT to improve security and illegal traffic on the shared border between the two countries.

The common goal of the United States and Mexico is to continue enhancing the capacity of multiple security and justice institutions, and of their members at the federal, state, and municipal levels, to mitigate and bring to justice transnational organized crime groups, to keep citizens and communities safe on both sides of the border, it was said in a statement.